Recently, a friend of mine who is also a psychotherapist, was sharing a technique with me that helps to clear emotional blocks in the body. She commented that sometimes people are unable to do the technique because they are so blocked from getting into their physical selves. In response, I reflected that although there are so many reasons why someone may be blocked from being fully embodied, most often someone simply might not feel safe enough to drop into their physical self. What I aim to do in my private sessions and my classes is to create safety through my touch and my presence.  In addition, the teachings of F.M. Alexander emphasize using the mind to direct the energy. By using these inner verbal cues, we are encouraging the flow of energy in a particular direction. My hands and my own body have years of experience, so I can detect the very subtle ways that people shut down their field and disconnect from their somatic cues. By using the breath, I persuade areas that are closed to open. For people who are too open in their energetic field, I help ground their energy in their muscles and their bones. The subtle awareness of this dialogue is not always understood cognitively by my students, but by the end of the session when they get off the table, their body feels different, and they know that something has shifted.

The reason people like massage and other hands-on modalities is because it gives them the permission to drop into the physical body with no expectation of performance.  Perhaps in the work of Body Dialogue, we go one step further. We use the breath and the mind to converse with the energy that lives within our physical existence. We create a somatic-based conversation. We call this the subtle body. In order to make our bodies our friends, we need to engage all aspects of our energetic field, which includes our thoughts, our belief systems, and the stories we tell ourselves. Engaging in this way is a process and a practice. Deepening our relationship with our body takes time, care, and attention. Some people see color and some see images. Some use sound and some use kinesthetics. We are all different. Sometimes we need the help of a practitioner to facilitate or initiate this dialogue. Ultimately, you have the potential to understand yourself more than anyone else. I invite you to enter this conversation with your body.

My upcoming retreat, Moving Into Joy, on May 4-6 will focus on the breath, toning, and moving. It’s my hope to introduce you then to the joy of movement and the joy of the breath as the source of life. This short blog post will help to explain some of the content that will be explored in the retreat.

the beautiful Atlantic Center for the Arts campus

Today I woke up with this phrase: “My breath is the source of life.” I heard it as a statement, not a prayer or a question, but a declaration. My breath is my source of life, and every day that I awaken to this truth, I know it is and will be a good day.

Since I was a child, my body has led me on my path. According to my mother, I started dancing before I could walk. Dancing was my joy and my guide. Whenever I was not feeling like I wanted to dance, I knew I was in trouble—something was wrong. Over the years my interest in dance led me to a desire to become a professional dancer. Sadly, once I started down that path, dance became less my friend and more my nemesis, because I when I was dancing, I was not breathing. I was holding my breath, wanting my dance to achieve some perfectionism that was outside my ability. So little by little, my dance was not full of life. It was full of rules, requirements, criticism, and disappointment.

Finally, after struggling in that relationship and not getting the results I wanted, I quit that dream and started down a different path, one that led me to the Alexander Technique.

The Alexander Technique is a mindfulness practice based in the body.  It is based on the principle that freedom of movement comes from how we direct our thought. By visualizing energy, we release tension in the neck to allow the head to be poised at the top of the spine. This is what F.M. Alexander called “directing our thought”. He named this “Conscious Control” of the body, in contrast to our habitual movement patterns, which often result in tension. The premise of the Alexander Technique is that the length of the spine is determined by a coordination of its parts. Learning this technique taught me where I was constricted in my physical movements. It led me to the awareness that my breathing patterns were not effective, and although I had mastered Alexander’s directions, I still felt very rigid due to shallow breathing patterns. I was introduced to Carl Stough’s work in Breathing Coordination at that time.

From Carl, I learned that the ease of movement stems from the ease of the breath. My diaphragm was so weak that I was not able to access a free breath. I had a to re-learn how to breathe. From years of holding my breath, I had to learn how to recondition my diaphragm. After leaving each session with Carl, I became aware of the contrast between my day-to-day breathing, and Breathing Coordination. 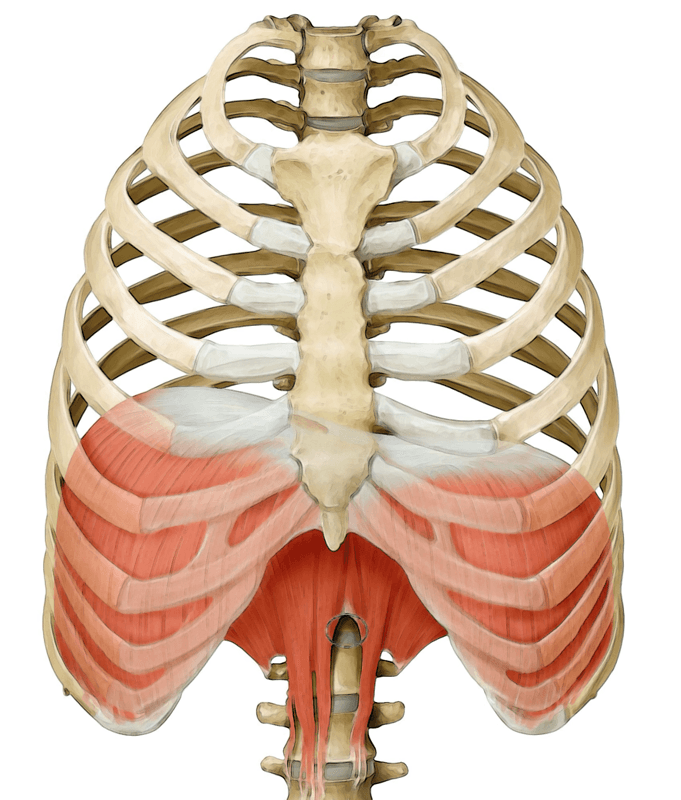 The Physiology of Breathing:

Unlike many techniques, the Stough breathing method focuses on the coordination of the diaphragm, the accessory muscles, and the voice as a three-fold approach to restoration and revitalization. It is based on restoring the strength of the diaphragm by using vocalization, toning, and vibration. It is meant to create a resonance through all the cells of the body—even the tiny mitochondria are restored by resonance. That response cannot be achieved by muscular pressure, or force. It can only come from ease and messaging from the brain’s autonomic system.

What I learned is that that modern life has restricted and constricted our breathing so that, rather than a full and easy breath, most of us have patterns of restriction coming from holding or pushing our breath.

In my sessions with Carl, I was able to realize once again the freedom I knew as a child dancing. From that knowing, I have centered all my teaching. Once I knew what a true, full breath felt like, I knew what freedom was and how to reclaim it in my body.

As a private practitioner and as a workshop leader, my focus over and over again starts with this coordinated movement of all the breathing muscles. The tools I learned from both the Alexander Technique and Carl Stough led me to what I call Body Dialogue.

This flow is the source of life, and all the great Eastern spiritual traditions teach that as a reality. But we in the West have distorted even that truth. Powering the body as we do in the West does not lead to freedom—it leads to stress.

I invite you to join me this Spring at the Atlantic Center for the Arts to explore Moving Into Joy.